He walks broken. Barefoot in the dust. Middle of the road, asphalt shimmering in the heat, he walks like one of the returning soldiers. The ones with plastic legs. Limp. Shamble. Limp. Shamble. He’s too young for the jungle so he’s here. On the long road to town, rimmed with cornfields. The stalks heavy with gold on one side. Mangy and rotten on the other. A good year and a bad year, shoulder to shoulder.

Smoke streaks across the asphalt from burning fields. Driving away the blackfly and maggots, refreshing the soil with ash. Next year will be better, they’ll say. Next year we’ll forget this ever happened.

His t-shirt flicks in the breeze. Scarlet smears across his chest and arms, diluted to pink and brown at the hems. Thick blood thinned by dirty water.

A car slows, then swerves when the driver sees the blood. Foot down hard on the gas. The car gone into a cloud.

The dust coats him and his skin and prickles his eyes but he doesn’t feel it. The road is too long, stretching endless. Sharp gravel digs into his bare soles. Threatens to cut.

His head sways side to side with every step, a metronome without its tick.

The blood, on his arms, his stomach under his shirt, his legs down to the knees, feels tight and sticky.

A horn blasts behind him. A truck sidles alongside. He never heard it coming. A man leans across the empty passenger seat and winds down the window.

He wavers at the sound of another person.

The voice, the life, pulls him. He turns but doesn’t see. His vision blurred by grit and glaring sun and exhaustion. He opens his mouth but the words seem to come from another throat. The air to make them from another chest. The brain to form them from another head. An innocent head. Three simple, perfect words float off his tongue and into the truck. 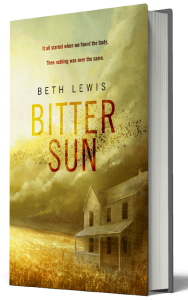